You are here: Home / Key West / The Area 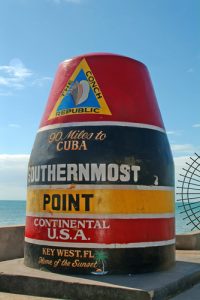 Key West is just a short and picturesque drive from Miami, Florida down US-1. The Florida Keys hold a lot of treasures for the traveler. The islands offer a tropical blend of azure waters, tropical foliage, fine dining with fresh seafood available daily, and accommodations for any budget, some with a history of notorious and notable figures. The laid back lifestyle, southern charm and Caribbean flavor are what make Key West what it is today.

Key West is the last Florida Key linked by the Overseas Highway. This small island paradise has been host to spongers and wreckers, drug runners, fisherman, and even the United States Navy. Over the years, Key West has evolved into a wealthy little tourist town. The island spans only two by four miles and has a population of approximately 27,000 full time residents.

One might say that there’s not much going on between the Seven Mile Bridge and Key West, but that’s just the way the Big Pine Key residents like it. This 30-mile expanse is arguably the most spectacular stretch in the lower Florida Keys. Between Key West and Marathon there are no shopping malls, no fast food restaurants, few buildings, few accommodations; but here you will find plenty of water. To the north is the Gulf of Mexico, and to the south, the Atlantic Ocean. Sometimes it is hard to distinguish between the sea and the sky.

Marathon, Florida is considered the heart of the Florida Keys because of its location in the middle of the Florida Keys island chain. The area of Marathon consists of many Keys or islands starting with Long Key, the Conch Keys, Duck Key, Grassy Key, Boot Key, Crawl Key and Pigeon Key. Marathon is separated from the Lower Florida Keys on the south end by the Seven Mile Bridge. This bridge is famous, has been seen in many movies and is host to the Seven Mile Bridge Run each year.

Islamorada is a short drive down the island chain from Miami and mainland Florida. The ‘Village of Islands’ boast the largest Florida Keys fishing fleet and one would guess that being dubbed the “Sport Fishing Capital of the World” makes that possible. Islamorada means “purple isles” and from a look around at the resorts and shops you can indeed see what they are talking about. The area has a focus on fishing but there are plenty of other things to do and see on your next Islamorada vacation.

As you drive south from Miami, the first area you encounter is Key Largo, the longest, largest and easternmost island of the Florida Keys chain. The Florida Keys are measured in terms of Mile Markers and Key Largo extends from MM 90 to MM 106. To the north of Key Largo is Florida Bay and to the south are the Florida Straits and the Atlantic Ocean.

Key Largo is home to two state parks, a national park and a national marine sanctuary. You may notice that there are no soft sand beaches like mainland Florida’s wide, sandy beaches. Instead, the Florida Keys has a living reef that extends its length and is the only living reef in the continental United States.